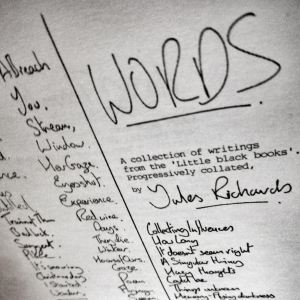 Sometime around 1997, I wrote the piece below.

‘We’re going outside and we may be some time’

I reflected back on it eight years ago. I wrote about trying to understand the idea of seeking pilgrimage, finding something significant, central to or ‘at the heart of’ a person’s worldview. A seeking to discover, understand, or be healed? A ‘quest’ for counsel or understanding.

But as I say in the writing, for all the ghosts, memories alone do not hold what I’m looking for. What am I looking for? I said to a Cornish friend recently “I miss the sea”, but do I? Yes, the sea can be a tonic “Coasts are liminal places – the edge of the known, opportunity… routes to somewhere…”  But what really are we all seeking? As we know, everything you ever want, everything you ever need is right in front of you. The greatest show is right here right now.

Taking me back to my Cornish roots again… I recently watched the much-acclaimed film ‘Bait’, created and directed by Cornishman Mark Jenkin. I was apprehensive as it’s had a lot of film-world applause. It’s not mainstream. It’s arguably art more than entertainment. But personally, I loved it. Not just the film itself, but the form and nature of the creation is resonant and leaves a lot of energy in the air. All good.

Mark Jenkin said in an interview with Mark Kermode “…they’d become Cornish by being away {outside?}…”

I don’t know. Any ideas?

‘We’re going outside and we may be some time’
Twenty-five years I grew, nurtured on Cornwall and the Cornish manner, the Cornishness that is now part of me. I still day-dream, of a ‘T’ shirt that announces “I’m Cornish and proud of it…” …is that all I have to cling to? (I haven’t even got this day-dream of mine).
I spent a childhood full of Cornwall’s riches: pebbles a sand, fIzzypop in cans, wind and rain, tunnels, holes, alleys & bunkers, vast sun-scorched gorse torched views, I could see both coasts from our bathroom window.
Spirits of the sea always whisper to me, the loudest whispers I’ve ever heard. I’ve heard it in Leicestershire, Crewe and Nice, I saw a little red boat barely afloat.
I cried at the beauty surrounding me as the holidayers screamed and sizzled and I laughed. I sat alone at the end of the phone, I ran with the gang, at low tide, across St Ives Bay, on new years day. We drank and we sang and played in the band. Gran bought saffron buns at Sunday-school treat, and pasties and pasties and pasties. Slept in the snow on the rocks on Carn Brea, laughed at what nan a grandad would say (that’s not the grandad that died in the fishing boat accident). Ate winkles with pins and vinegar picked from Porthleven harbour, got filthy. Held on tight as the storm wind rips so hard it bites. Sat in a haystack in the sun and got covered in mites. I’ve lay for hours and been soaked up by the whole of Mounts Bay, on the clearest ever, hottest ever, hottest ever day. Walked home at midnight from to Camborne from Hayle, met a girl in Redruth and another in St Just, got drunk in Crantock, earnt a wage in St Ives ‘ saw a dream in St Austell, learnt some verbs in Fowey… grew towards man from boy in Cornwall…  …only, they’re all memories.
I return and see the most rugged of faces smile and share the day like children returning to play, waves so worn from years of scorn, skies so blue they seem brand new. A scarred town refuses to frown, yet sings and raises its glasses, everywhere I look I see me and I see pasty smiles, rugby miles, unique Cornwall style saying this is us but we do say we.
I’ve moved away now, don’t know why, but I know I can’t go back. Jane’s not there, Craig’s gone, David’s moved off, So has Jon. Matthew’s in Manchester, Lisa’s in Suffolk, Richard’s in Cardiff, Kay’s in Bath, Lee is in Luton and Mark is in Crewe, and I’m in Leicester for something to do. Cornwall, in essence, has everything, God and the Devil are surely within. but it hasn’t got what I’m looking for. . . . what am I looking for?
I’m going outside and I may be some time…