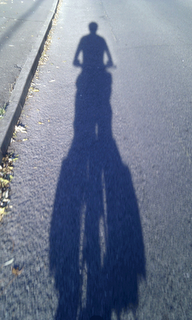 Inspired by “Free Wheeling” and the “thoughts of a welsh brummie”

Another, celebration of cycling:

Like many, I started cycling up and down along the kerb as a youngster in the early ‘70s. A Mini Moulton, a Grifter, a Chopper and then a Raleigh Sun Solo if my memory is correct. In my early teens I documented daily rides in Cornwall, from Camborne via Redruth around Carn Brea and back, to gain the ‘physical’ element towards my Duke of Edinburgh Award.  I think this was my first taste of the freedom experienced when travelling on a bike.  I also spent a few teenaged summers with frequent cycle trips to various beaches – a privilege afforded with our family home viewing both the north and south coasts of proper (West) Cornwall. It was a typically average initial experience of cycling, but cycling has always been ‘on my list’ of things that I enjoy.

I can’t recall when I ‘left the bike’ in the garage. But as many do, it stayed there for quite a while. I didn’t take it to university in Cheshire. I bought a new bike with a insignificant lottery win in the early 1990s but alas it didn’t see much use. I did take it out a few dozen trips around Rutland Water and the like. Pre-rugrats, Em and I took our bikes (on the car) on a quick tour of the New Forest and Dorset and we made a few outings here and there but the bike were really a neglected accessory. We had the children and the bikes were lost in the garage under the increasing pile of outgrown children’s ‘stuff’.

I don’t recall what made me do it, but one Sunday morning in Early 2011, I said to Em “I’m going round the block on my bike!”. A quick but knackering ride around a few villages, but boy was it invigorating. No kit, no cycling paraphernalia, no agenda… just me wheels and a road (and a few sweaty inclines).

To the prospect of ‘cycling to work once a week?’, I recall adamantly thinking ‘never in a month of Sundays!‘ – it was seriously not an option.

However, after a month or so I found myself riding to work and back daily.

Two years later and a lot’s changed. I invested in a new bike early on, and we eventually decided to sell the family’s second car. I’ve been through the phase of supposed “must have cycle-wear” that is foisted at you from the pseudo-cycle-subculture – (ignore most of it – save some money and soul).  I have been through two winters of cycle commuting, and frankly the thought of it can be far worse than the reality!  I’ve slowly moved towards more of a cycle-based or more pedestrian frame of mind while cycling. Initially the prospect of the “cycle-route” seemed silly and again ‘not an option’. Due to my indoctrinated vehicle/road based mindset, it took a good while to see sense and use alternative routes and cycle provision where available and fit for use.  It’s an ongoing lesson and the prevailing attitude ‘out there’ can be survival of the fittest. Steer clear and let them fight it out I say. The current state of cyclist awareness and road/path design/provision is another discussion.

Cycling has it’s perceived negative moments, but to be honest if you are prepared, it’s all relative. What is “a soaking” from a heavy shower?  (actually quite rare) Just a rare soaking.  What’s riding in the dark with adequate lighting?  It’s fun, it’s invigorating, it’s enlightening!!  What’s having to be part of the push and pull of other road users?  Give it space and it’s edifying.  Yes some things are a challenge. I am no fanatic, but I rode to work daily this winter though the snow and ice and kept my combat shorts on this year – shorts (and thick socks) are easier! The perceptions is worse than the reality.  I am learning daily.

Coincidentally, a few years ago, I started looked at a my (mid-life) physical and mental habits and practices. At a desk from 9-5, I saw almost zero daily exercise. The nature of my work was “head down and get on with it”.  My work environment sees no visitors and its cut-off location means little opportunity to escape for the occasional brief distraction.  Probably many jobs are similarly suffocating.  These, and other genetic/chemical factors, led to a diagnosis of ‘clinical depression’ (another story). On the whole, I was probably a good example of covertly ‘unfit and unhealthy’.

After much reading and sharing, adopting new routines and practices (including ongoing mild medication), two years later sees the start of a different outlook. Many other things have been part of the experience, such as; world-music singing with a large choir; the study of aspects ‘mindfulness’; the awareness of one’s diet of foodstuffs and also ‘consumption’ generally; new realisations about how one’s mind works.  But cycling has had a significant role to play in the generation of a new physical, mental, (and possibly spiritual?) mind.  Riding a bike induces endorphins and exercises the breathing and the mind. Riding a bike is only one of many things that helps me rise above and duck below the ongoing ‘stuff’ that the world breeds. The experience of cycling has many facets and I can recommend reconsideration to most people!

I do suggest you try to think of it as “riding a bike” and not necessarily “cycling” – the “cycling” subculture can be another dragon which can consume – steer clear of dragons. 🙂

The Times has been running features around “Cities Safe for Cycling”. I like many others encourage you to have a look!

I am not a follower of the sport of cycling, worthy though it is. Just as an average driver is probably not a follower of Rallying or Formula 1, exciting though they are. I am not a lycra lover. I don’t (anymore) try to beat my time! I don’t think you should have to “dress like a cyclist” to ride a bike – practical ‘normal’ clothes can be found to suit most purposes. It’s just riding a bike to get from a to b.

The simple act of riding a bike is good for so many reasons – personally, socially, mentally, physically, community, interaction, pace, progress, ambition… all can be fed by a new way (an old way) of experiencing things…

Just get on and ride.

There's an Old Original and a burger at the end of this two mile long lane.
Office chrimble nibbles and chinwag... Under a tree... With a beer (or two)
Could we, might we, dare we
Brrrrrrisk stroll...