…and so after a spell in both the doldrums and some rough seas, the little red boat found harbour and anchored up for a while. After leaving the land that hope forsook, it’s a reminder; be mindful who you share your boat with… the last few months have been disturbing, worrying and transformative. I replenished provisions, took another look at the charts, did a little exploring with the natives and took stock. We’re now back sailing with a purpose, I think…

Enough waffle! Back on the bike! 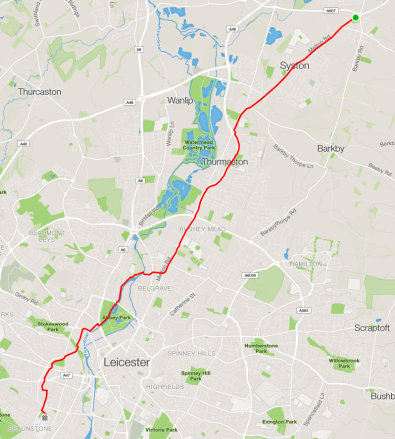 After 4 years doing a 7.5mile commute into Leicester, my new route to work is now 9 miles.

Following the tried and tested route through Syston and Thrummy, down Rushey Mead‘s sad excuse for bike infrastructure, but then after a short jostle on Melton Road, it’s off to the canal! Following the Grand Union Canal, a refreshing ride through Abbey Park and then following bits of the NCN (LOL)  to my destination.

The 9 miles by bike takes me 50mins #puff #pant (I have had 6 months off). Note: my bike is a bike for simply riding from A to B. Not a featherweight road racer for breaking the next sweaty record. It has mudguards for the rain, panniers for the packup, and a big bell, etc.

Nerdy bit: After another 2+ years of 32mm Schwalbe Durano Plus tyres, which have been fantastic(!), I’m changing to Marathon Plus Tours (cos the LBS’s closing and selling stuff cheaply, and my Duranos are shot through). So I’ll let you know how the Marathon 35mm tyres fare.

A bit of the commute can be seen below:

Life in the gutter...
“Sometimes the best way to get to know a new place is to get lost in it.” All The Lonely People @mikegaylethenovelist
"Your enquiries will be esteemed"
Soak up the energy ✨