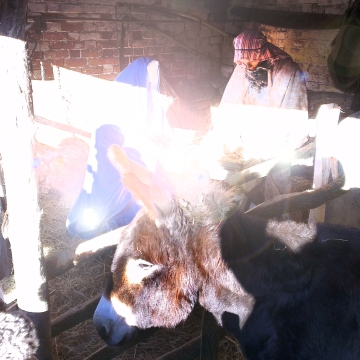 It’s almost Christmas and even the sternest of critics is likely to hum at least a bar of something related to Christmas over the coming few weeks.

Many will have heard the Christmas story again (you can find it in Luke 2:1-20).  Surprisingly the written part of this story is relatively short. The details in the Biblical account have been somewhat embellished overtime by high and pop culture retellings.

For me it helps to ‘realise’ the story to know that the flowery bits are there due to colourful imagination and that in essence it was possibly a simple real ‘down-to-earth’ event.

Many take  for granted that Jesus was born in a stable, it’s hard to un-imagine the imagery; however, the Gospel never mentions exactly where the baby was born – just where he was laid afterward. It’s just one of the embellishments built into mythology surrounding the Christmas story that we take for granted.

Did Mary ride a donkey to Bethlehem? Perhaps, but there are various other possibilities. The Bible doesn’t say how she got to Bethlehem. It only says that she came with Joseph.

Did Mary arrive in Bethlehem the night she gave birth? The Bible does not suggest this. They could have arrived weeks earlier. The Bible simply states, “while they were there [in Bethlehem], the days were accomplished that she should be delivered” (Luke 2:6). Arriving in town well before her due date would make more sense.

Thanks to Huw Spanner for these thoughts:

There were no inns or stables in first-century Bethlehem! The Gospels imply that he was born in a house full of family. Ordinary houses then consisted of a lower ground floor where the family’s animals spent the night and an upper ground floor (ie a stone platform) where the family lived and slept. The manger would simply have been an alcove in the side of the platform. More affluent families would have had a first floor – an upper room (as in the Last Supper) for relatives and other guests to stay in.

Early translators didn’t really know what the Greek word meant, so (IIRC) they guessed it meant “inn”. There is no mention of a stable in any of the Gospels in any translation. But first-century Bethlehem was much too small a town to have an inn, let alone a stable. Besides, the reason Joseph was in Bethlehem in the first place was because he had to go back to his home town for the Roman census. Therefore, he would have had family in Bethlehem, and all his relatives would have come down for the census. No one would have stayed in an inn (even if there had been one) if one of their extended family had a house locally – if for no other reason than that it would have been very insulting to their extended family. Joseph and Mary had been engaged when she became pregnant, and they were certainly married by the time she gave birth.

Thus, the situation the Gospels imply is that Joseph’s family home was full of visiting relatives – the upper room was full – so the baby was put in the manger. The house would have been warm, the manger would have had hay in it and Jesus would have been surrounded by his extended family. A very different picture from the one that Christmas carols and cards, and authors of blessed thoughts and Nativity plays, like to paint.

… in essence it was possibly a simple real ‘down-to-earth’ event.

Holocaust Memorial Day Trust (HMDT) encourages remembrance in a world scarred by genocide. ...six million Jews murdered during the Holocaust, alongside the millions of other people killed under Nazi persecution of other groups and during more recent genocides in Cambodia, Rwanda, Bosnia and Darfur.
What is this life if, full of care,
Morning mist...
Solo rower ...